Another excerpt from the novel I am currently writing, tentatively titled “The Rocky Orchard.”  Also an homage to Mary Oliver, and all those who find the natural world transformative.

The following morning, Mazie looked out the kitchen window above the sink to a dense, gray nothingness.  She filled the ancient aluminum coffee pot with cold water and strained her eyes, but the fog was pea-soup dense. That was what they called it in that neck of the woods, as Mazie recollected, and she had not seen a fog of its like in a long while. Looking out the window, she could not see to the edges of the farm house.  The walls faded and bleached into nonexistence, vanishing into the gray.  Fog as thick as this drank up all sound, except for the intermittent plops of water, the humidity so high that droplets condensed out of thin air and fell heavily to the ground.  It reminded Mazie of being in an airplane, flying through an impenetrable cloud bank, surrounded by an utter void, feeling as if she were being propelled deeper and deeper into nothing at all.

Mazie wrapped a light sweater around her shoulders and grabbed her coffee cup from the porch table.  She held the screen door and closed it gently behind her, barely making a sound.  The door’s usual slam seemed like it would be an intrusion into this silent, featureless world.  Mazie wandered the short distance to the near end of the orchard, where the ancient apple trees appeared out of the gray, one by one.  She ran her hand along the craggy bark, ran her finger in the grooves between the bark’s scales.

Mazie took a couple more steps into the orchard.  On one of the low-sitting but jagged rocks, she made out the faint remains of white paint.  Even in dim and fog, the old paint produced a chiaroscuro of light and dark in the deep crags.  Her father had painted a number of rocks throughout the orchard, a warning for himself and anyone else riding one of the family’s ride-on lawnmowers through the obstacle-course orchard.  Mazie was fairly sure she had never mowed the apple orchard, never wanted to try. But her father approached it as a challenge, a game, to see how fast he could go, careening around, turning sharp corners, timing himself.  She could picture him in his perennial work outfit – a plain white tee shirt and light blue pants – perched high on one of their two mowers with a whisper of a smile on his face.  He hit various rocks many, many times.  Mazie could never forget the sound.  The noisy, constant engine halting in an instant, giving way to the thunderous scrape of metal against rock that seemed to shake the surrounding woods to their core, then stop dead in abrupt silence.

One time had been different.  The metallic crash was not met by silence, but by the continued whirr of the engine and within it, the sound of her father screaming “Help!  Help me!” with panic in his voice.  On one of his daredevil sharp corners, the mower had tipped completely over, on top of him, and the blades had kept on turning.

Mazie shuddered, though her father had been fine.

She wandered back toward the house, and climbed the path to the dirt road.  Mazie looked in both directions, taking her time, in case she might see the older woman walking along the road.  She saw a slight movement at the very edge of visibility the fog would allow, but it vanished.  It may have been the woman, Mazie thought; but she could not be sure. 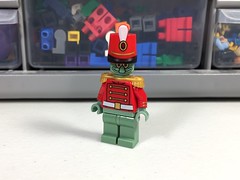 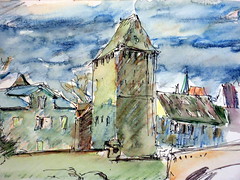