Well, I did warn everyone that, despite my prior resolutions, I am writing this book out of sequence.  I am also writing, um, several chapters at the same time — yet another thing I resolved not to do, once upon some hypothetical time.  At the worst times, it does feel quite scattered and schizophrenic.  But, I have found that, to my surprise, this “strategy” also creates a deep sense of closeness to the characters, and the story, and deepens the way that this lives inside of me as I plod along.

Based on feedback (yeah, blogging!  yeah, feedback!!) , posting these chapter snippets has been really successful in creating a lot of interest in “Pushing the River,” while generating total bewilderment about where this is all going.  Mission Accomplished!

Without further ado, here is a new snippet:

The first time my Lady ever saw Sierra, she was plunked in her sister’s lap at the one and only performance of the Boy’s music group.  Marie sat on the floor in the middle of the open room as the musicians set up, both arms bear-hugging Sierra as she rocked the little girl back and forth in exaggerated swings.  And she was a little girl, too.  Ten years old back then, and small for her age.  She was all eyes – immense pools of deep blue that flashed out from behind chin-length brown hair that gave the very strong impression it wasn’t going to follow anyone’s orders no matter how hard they might try to maneuver it into place.

She exuded scrappiness, just like her mother and her sister; and whether this was a learned, shared response to all that life had thrown at them, or a trait embedded in the strands of their DNA, it was most certainly there.  She looked like she should be a literary character in a series of books that generations of children would adore, or the star of some adventurous, clever, educational TV show.

My lady didn’t see her again until the next summer, when the Boy married Marie.  Sierra was not much taller, but still managed to show the signs of gangly, awkward early adolescence, her arms and legs getting in her way all the time, and little, high-up breasts poking out from her T-shirt.  Once in a while she could be caught with a far-off look on her face, as if she were gazing way, way into the future.  Other times, she was a little girl; one of those legs would get in her way and she’d take a tumble and need her mama to carry her around for a while.

Sierra didn’t make her annual trip to visit her mama the following year, so the next time she came for the summer, she was thirteen years old.  If she stood up straight as a die, she would still not reach 5 feet; but in that two years, everything had changed.  Instead of being all eyes and a hank of hair, she was all eyes…and absolutely enormous breasts.  In an effort not to look like some cruel joke had situated a little girl’s head atop a very-much grown woman’s body, she had begun wearing makeup and coloring her long, still-wild hair.

No one knew quite what to make of her when she first arrived that summer – whether they should talk to her just the same as always or treat her like the entirely different creature that she looked to be.  But other than spending sizeable amounts of time trying to straighten out and generally tame her long mane, she proved very much the same.

At least that’s what everybody thought at first. 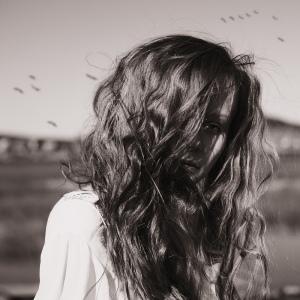